Another visit with an American legend, Mark Twain. I'd read this book before, and it recently popped back into my mind as I was thinking about the purpose of the arts and literature, and history. To feel engaged with the past, and feel a voice of a former time period reach through and reassure you in your present world, cheering you up in your current circumstance, you can really become nostalgic for a time period you were never part of. 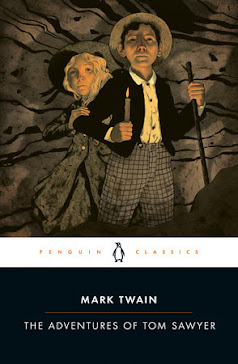 The innocence of the late nineteenth century, in rural southern America (politely disregarding the malicious racism for a literary experience), I love Twain's unapologetic individuality. He's deliberately teasing our notion of what literature is supposed to do. The children's, magical world he describes is accurate to all generations of children, playing pretend. Acting as pirates, or playing cops and robbers, or having superstitious rituals and "voodoo" magic; that moment before you really learn how the world works, and are still filling in all the blanks with your imagination.

It's sometimes important to think of a work as published in its time period, and what other genres it may have competed with at the time period. Children's literature nowadays is a popular genre, with its own industry almost, due to how much money there is in it, but I'm thinking about a time period where an entire book dedicated to a childhood experience, told from the eyes of a kid, or a gang of kids, was probably a wildly new and innovative idea. Back in those days, it seems like most publishers would have thought that a child as the centerpiece of a narrative would not have offered enough stamina or charisma for an entire book. Maybe there's not enough going on in children's lives to hold the attention of adult readers...

But Twain is one of those champions of individuality that defied history by "doing his own thing" as it were, creating his own genre and form of storytelling based on his own individual charm that he knows is not easily reproduced or upstaged. The innocence of childhood and the games they play are abruptly brought to an end when the two main boys, Tom and Huck, witness a murder by a gang of adults and are brought in to testify as witnesses.

The general intimidation factor of adults is there, with them poking into the story then and now to give orders and limit the fun of the kids, another highly relatable aspect of childhood, relevant to every era.

People like Twain just go to show what kinds of drama and tension can be pulled from any situation, no matter how simplistic it looks on the surface. The deeper the imagination of the storyteller, and the less they take for granted, the more enriching the experience. The most important character in any story is not the protagonist, but rather, the story teller. If the storyteller is boring, than the events of the plot will fall flat, no matter the content.

Popular posts from this blog

The Most Beautiful Woman in Florence- A Story of Botticelli 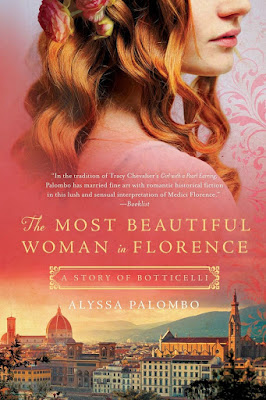 While this type of cheesy romance is not usually my genre, and I normally wouldn't even admit to having devoured an entire book cover to cover about this type of drama, preferring to maintain my masculine dignity and stride on with chest out, I did enjoy hearing this fictionalized version of the inspiration behind some of history's greatest paintings.      The story is told from the perspective of one Simonetta Vespucci, as she is betrothed to her husband, Marco Vespucci, during Renaissance times, in Florence during the reign of the Medici family. She is hailed as an astonishing beauty with no equal, and is adored everywhere she goes, has men fighting over her, and lining up at her balcony to sing songs to her almost every day from the street below. (Pretty girl problems, right?) We follow her marriage to Marco Vespucci, (cousin of Amerigo Vespucci, for whom America is named) from her teenage years into her early twenties, before she was taken ill with a form of tubercul
Read more 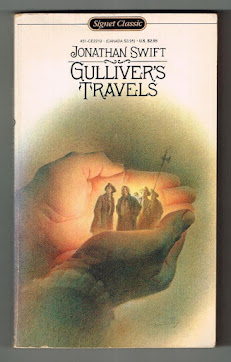 Yet another classic entry, one of those books we all hear about, maybe even watch a movie adaptation or two, but never really pick up to read ourselves.     "Wait, is that that one where the guy washed up on a desert island and he's like, stranded for like, 20 years?"     "No, I think that's Robinson Crusoe. Gulliver's Travels is the one where he goes to that island of like, little people, and they tie him down.     "Ooooh yeah. I've heard of that."     Yeah, it's that one. Now, it was interesting to discover how that famous bit of the story, when Gulliver is on the island of Lilliput, with the small people, is actually only the opening bit to the whole thing. The first island he lands on is filled with the small people. After that adventure concludes, he moves onto another island with large people, like big enough to hold Gulliver in the palm of their hands. So the second island is the reverse of the first.     It's amazing how until I
Read more